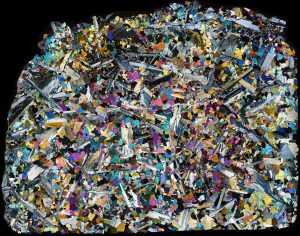 SaU 562 is an unbrecciated eucrite with “approximately equal proportions of anhedral to bladed, white plagioclase (to 3 mm) and honey-brown, anhedral, granular pyroxene (to 1.5 mm) crystals.”

Interesting story about this thin section. I originally thought it was an unclassified eucrite; the label reads “Labenne Eucrite” and I was told it was unclassified when the thin section was made around 2009. After some friendly help, I discovered it had been classified as SaU 562. I was surprised to find that it was a eucrite which I had already photographed! However, this previous SaU 562 post was one of my first attempts at making a panorama, so a comparison between the old and the new reveals my progression of tools and technique quite well.

View on Gigapan | View with krpano